Spartans are popularly known for being one of the toughest guys of ancient history. If you’ve watched the film “300,” it’s actually pretty neat to know that the film isn’t entirely fictional, and that an actual outnumbered army of Spartans prevailed over Persians.

Why are we talking about an old film featuring an ancient army of badasses? Because we have a Kraken in our hands - the Kraken pre workout that is.

Introduced to the market by Sparta Nutrition, Kraken promises to be an extreme pre workout among other things. What it means by extreme, will find out later in this review.

Is Kraken pre workout an effective pre workout powder? Is it worth bearing the Sparta name? Let’s find out!

Where we're finding the best prices

Sparta Nutrition has been in business for years. They’ve drawn quite a good following largely due to their high quality line of gym accessories and supplements. They’re known for protein powders, but they also sell BCAAs, fat burners, keto supplements, and of course pre workouts. Here’s what we noticed: 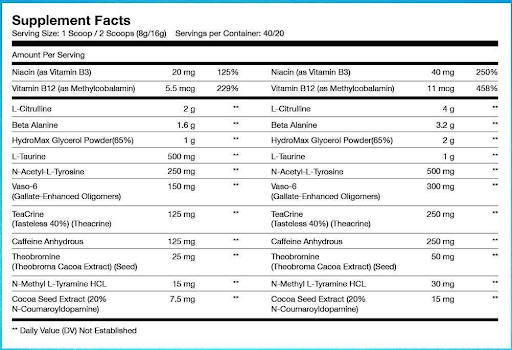 Directions: As a dietary supplement, take 1 to 2 scoop (s) of Kraken with 8-10 oz of water. Consume 30 minutes prior to exercise. Do not exceed recommended daily intake.

Who is Kraken Pre-workoutmade for?

Kraken Pre-workout is formulated for users to get pumped, but are tired of the usual ingredients and formula design. More than pumps, it also has an innovative approach to stimulation and fat burning.

What are Kraken Pre-workout’s benefits?

Expect to get massive pumps, a really sizeable dose of energy, and quality lifts.

Beta alanine at 3.2 grams is likely to make users itchy, but it’s temporary and is a sign that it may be working. The 250 mg caffeine is just 2.5 cups of coffee, and most can handle it without the usual jitters and crashing. However, if you hate coffee then you will probably have issues with this much caffeine.

Also, it has Tyramine. It’s banned in sport and if you plan on competing, it’s smarter to not get Kraken and instead go for a recommended supplement by your coach or sports organization.

Kraken pre workout is a really potent pre workout capable of giving you a good time at the gym. Properly dosed ingredients where it matters, sizeable pumps, solid energy boosts, and a good angle on mental focus. The formula will excite other users, some will find it too ambitious.

The only nitpicks we have are the redundant additions in the formula and of course the premium price tag. If you have some cash lying around and like to try something new, Kraken Pre-workout is the right pre workout for you.

Our favorite pre-workout on the market right now is GAT Nitraflex. Boost your endurance, pumps, intensity and overall workout.