Many pre workouts put energy and strength at the top of the priorities when formulating a new product. While there is nothing wrong with that approach, we can’t help but feel saturated with virtually all the products out there just copying the work of the other. Most companies are like this, but C4 is different. C4 has been in the game for too long to not be known as an innovator in the industry, and today we’ll get to explore one of their rather unique take on a pre workout in the form of C4 Ripped.C4 Ripped Pre-Workout is unlike any other pre workout we’ve reviewed so far. Instead of going all in on the usual pre workouts, C4 Ripped Pre-Workout has some fat burning angles to it. The idea is to build on people’s efforts to lose weight by means of burning fat and not muscle.

Because too many people have a really bad diet, and when they workout they end up losing muscle. C4 Ripped Pre-Workout’s formula is said to be designed to avoid that.

Can C4 Ripped Pre-Workout be the alternative pre workout we all need or will it be a nail that deserves to be hammered down? Let’s go find out.

C4 Ripped Pre-Workout is described as a pre-workout supplement that combines the explosive energy of C4 with ingredients specific to fat loss. This formula is further stated to help you train harder while supporting your body’s ability to burn fat. 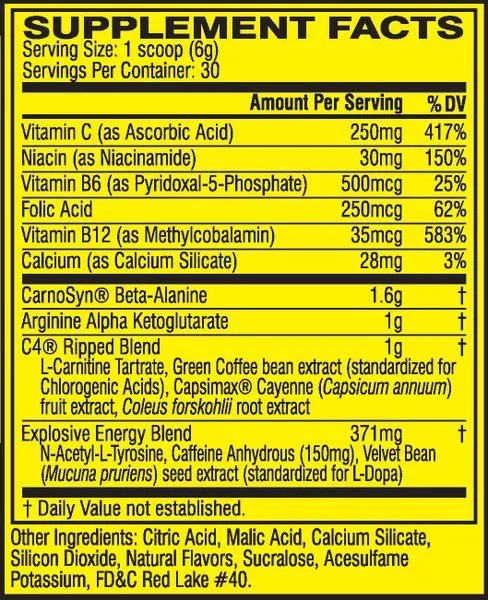 Directions: Take one serving (1 scoop) of C4® Ripped, mixed with 6 fl. oz. of water 20-30 minutes before training. During your workout, it is recommended that you drink plenty of water or a performance beverage such as Cellucor Alpha Amino® to stay hydrated. Some individuals may experience a harmless tingling sensation, which is attributed to beta alanine. USE ONLY AS DIRECTED.

Thinking about ordering C4 Ripped? We've put in the research so that you don't have to!

Here's where you can get C4 Ripped

CarnoSyn is the number one brand when it comes to beta alanine. Not only does CarnoSyn promise a more bioavailable form of this amazing ingredient, but they also promise to have a reduced tingling experience - a side effect that’s both unwanted and sought after by many beta alanine users, with the latter reasoning that it’s simply a sign that the ingredient’s working.

Who is C4 Ripped Made For?

The first one is self-explanatory, but the second one goes a bit deeper with context. People who have trouble losing weight would definitely not want something that contributes to making them weigh more on the scale. Creatine, on top of the benefits it gives, has a tendency to also make the body store water weight or increase water retention. So, eliminating creatine was actually a good idea in this case.

C4 Ripped Pre-Workout’s highlights definitely involve a decent fat burning with a not-so-bad lift and pump on the side.

The main sources of side effects will likely come from either beta alanine or caffeine.

Beta alanine’s known to cause some tingling sensation, but this is just the molecules passing through your body. This goes away after a good workout session, but some people don’t like it regardless.

Caffeine at 150 mg shouldn’t be too hard even for non coffee drinkers. That’s 1.5 cups of coffee which will be taken for strenuous physical activity, and caffeine would be used up to the last drop. Just a good FYI, some of the common side effects of caffeine ingestion are jitters, crashing, etc.

C4 Ripped Pre-Workout is understandably a blend of fat burners and pre workout for a shot at bringing the best of two worlds in one can. And they mostly got it right.

The fat burners they used are pretty good and respected in the weight loss category, especially with the brands they used. Add that to the caffeine content which also synergizes for a good thermo-energy boost, and you have a bonafide fat burning product.

The issue is with the lackluster pre workout blend they offered, but this is expected. Pre workouts in general require lots of doses for optimum performance, but maybe C4 Ripped Pre-Workout just settled with a half and half for both marketing and pricing reasons.

Despite the pre workout issues, we think C4 Ripped Pre-Workout is a really good pre workout-burner to recommend.

Enjoyed this C4 pre-workout review? Consider getting it here: